On Mustang Range, a Battle on Thinning the Herd 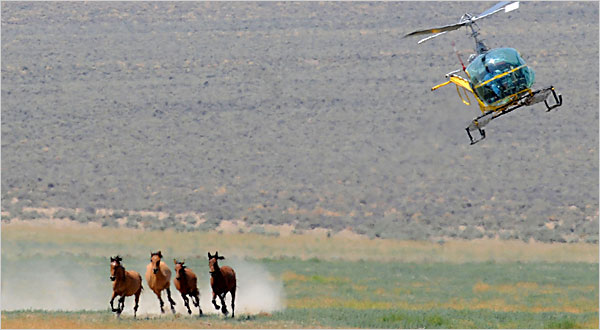 GERLACH, Nev. — Five mustangs pounded across the high desert recently, their dark manes and tails giving shape to the wind. Pursued by a helicopter, they ran into a corral — and into the center of the emotional debate over whether euthanasia should be used to thin a captive herd that already numbers 30,000.

The champions of wild mustangs have long portrayed them as the victims of ranchers who preferred cattle on the range, middlemen who wanted to make a buck selling them for horsemeat and misfits who shot them for sport. But the wild horse today is no longer automatically considered deserving of extensive protections.

Some environmentalists and scientists have come to see the mustangs, which run wild from Montana to California, as top-of-the-food-chain bullies, invaders whose hooves and teeth disturb the habitats of endangered tortoises and desert birds.

Even the language has shifted. In a 2006 article in Audubon magazine, wild horses lost their poetry and were reduced to “feral equids.”

“There’s not just horses out there, there’s other critters, from the desert turtle in the south to the bighorn sheep in the north,” said Paula Morin, the author of the book “Honest Horses.”

“We’ve come a long way in our awareness of the web of life and maintaining the whole ecology,” Ms. Morin said, adding, “We do the horses a disservice when we set them apart.”

Environmentalists’ attitudes toward the horses have evolved so far that some are willing to say what was heresy a few years ago: that euthanasia is acceptable if the alternatives are boarding the mustangs for life at taxpayers’ expense or leaving them to overpopulate, damage the range and die of hunger or thirst.

The federal Bureau of Land Management, the legal custodian of the wild horses and burros, recently proposed euthanization. For years, the bureau has been running the Adopt-A-Horse program, selling mustangs from the range to those who would care for them. But 30,000 once-wild horses were never adopted and are being boarded by the agency at facilities in Kansas and Oklahoma (another 33,000 run wild). As feed and gas grow more expensive, the rate of adoptions plummets.

Boarding costs ran to $21 million last year and are expected to reach $26 million this year, out of a $37 million budget for the bureau’s Wild Horse and Burro Program, which is intended to protect the animals. And drought lingers here in northern Nevada, where the mustangs were rounded up on a recent weekend morning to prevent them from starving.

The bureau “can’t do a good job of taking care of horses on the range if they have to take care of all the horses off the range,” said Nathaniel Messer, a professor of veterinary science at the University of Missouri and a former member of the federal Wild Horse and Burro Advisory Committee.

Steven L. Davis, an emeritus professor of animal science at Oregon State University, said: “Many of the wild horse supporters claim that the horses have a right to be there. I reject that argument.” He added: “They damage the water holes. They damage the grasses, the shrubs, the bushes, causing negative consequences for all the other plants and critters that live out there.”

For groups formed to protect the horses, the specter of euthanasia as a solution remains anathema. “It’s not acceptable to the American public,” said Virginie L. Parant, a lawyer who is the director of the American Wild Horse Preservation Campaign.

As mustangs increasingly competed with cattle in the 1940s and 50s, many were rounded up and slaughtered. They found a champion in Velma Johnston, better known as Wild Horse Annie, who pushed Congress to act. In 1971, Congress gave the federal bureau the job of caring for them.

Shelley Sawhook, the president of the American Horse Defense Fund, argues, along with other horse defenders, that the federal government “mismanaged the program from the very beginning.” She added that “their proposal to euthanize is a stopgap measure” to cover what she believes is an overly aggressive policy of removing horses from the range for the benefit of cattle interests.

Accusations of mismanagement have dogged the bureau across Democratic and Republican administrations; a decade ago The Associated Press found that a few agency employees were adopting mustangs themselves and selling them to slaughterhouses. In the wake of lawsuits by the Fund for Animals and other groups, the bureau required anyone adopting a mustang to sign a binding pledge not to send it to a slaughterhouse. In 2001, the Earth Liberation Front took credit for the firebombing of an agency hay barn on the Nevada-California border.

Today, the fundamental rift between the bureau and its critics involves two judgment calls: how many horses can a range of 29 million acres support, and how should that level be maintained?

Arlan Hiner, an assistant field manager for the bureau in Nevada, said, “We’re supposed to be managing for ecological balance.” Over all, the bureau wants to cut the wild herd by about 6,000 horses. Ted Williams, the author of the Audubon article, argued that without euthanasia such a balance would be impossible.

Mr. Williams’s article infuriated the mustang advocates even more than the agency’s proposal to resume euthanasia. Ms. Parant laughs at the idea of attributing the range destruction to horses when cattle greatly outnumber them.

Jay F. Kirkpatrick, a scientist who is the director of the Science and Conservation Center in Billings, Mont., wrote in a rebuttal to the Audubon article that Mr. Williams had not given sufficient weight to birth control options, which could make “serious inroads” on horse populations.

“The issue is not that the technology doesn’t exist, but that the B.L.M. is not investing in it,” Professor Kirkpatrick wrote.

Herd sizes, the bureau says, double every four years. And the agency is working with a contraceptive that is largely effective for two years in mares. Alan Shepherd, the official who helps run the contraceptive program, said that it showed promise but had limitations.

“The ultimate thing is you can’t catch them all,” Mr. Shepherd said.

The horses that came rushing into the corral ahead of the helicopter were taken to a holding facility and will eventually find their way into the Adopt-A-Horse program.

The bureau said it would be premature to discuss the criteria for culling horses or the means of euthanasia. Longtime observers believe that older, unadoptable horses would be the focus of such a program. And in past mustang-thinning operations at holding facilities, marksmen shot the horses, said Dr. Messer of Missouri.

After Representative Nick J. Rahall II, Democrat of West Virginia and chairman of the House Natural Resources Committee, raised questions this month about the euthanasia proposal, the bureau agreed to make no decision until after completion of a Congressional audit of the program, which is due in September.
Posted by Endurance.Net at 8:52 AM