The Glushu revolutionises the centuries-old practice of horse shoeing, by swapping nails for glue

A Gateshead equestrian firm is galloping towards huge sales growth thanks to orders coming from thousands of miles away in America’s cowboy country.

GluShu has invented plastic coated, slip-on horseshoes which revolutionise the centuries-old practice of horse shoeing by swapping nails for glue.


Design engineer John Wright initially made the GluShus for horses with damaged hooves in 2015 but their popularity has grown around the world, opening up new opportunities.

Now the firm is set to see sales double this year, on the back of latest success in the US, where the company has signed a deal with a Florida-based distributor and formed a working relationship with renowned equestrian institution, the Kentucky Horseshoeing School...

Posted by Endurance.Net at 8:52 AM No comments:

It is said that chicken tikka masala is now Great Britain’s favourite dish. If so, perhaps we should anticipate an improvement in public health, given the supposed health-giving properties of turmeric. Turmeric, a spice long used in Asian cooking, also has an impressive pedigree of medicinal uses.

Numerous laboratory studies have suggested that turmeric (or more specifically curcumin, an active constituent) has not only anti-inflammatory properties, but antimicrobial, wound healing, and anti-parasitic properties as well.

It is becoming fashionable to administer supplements containing curcumin to horses, although there has been little research into its effect on horses.

Samantha Wuest and colleagues in the Department of Animal Science, Food & Nutrition, Southern Illinois University, Carbondale, IL conducted a study to evaluate some of the effects of curcumin in horses. The work is reported in the Journal of Equine Veterinary Science...

Posted by Endurance.Net at 8:49 AM No comments:

Question: I really enjoy your monthly Conformation Clinic column. The information is very useful when I work with and care for sporthorses, but I'd also like to know what endurance horse conformation and qualities I should look for when selecting a mount. Can you offer any suggestions?

Hat Trick LA is an example of an endurance horse with ideal conformation for the sport. The 10-year-old Arabian gelding with 600 lifetime American Endurance Ride Conference miles "is standing a little uphill in this photo, so it looks like he's leaning forward. On flat ground, he is quite square," says Dr. Roush. "I cannot fault his conformation. I might wish for his legs to be a tad longer, but that's splitting hairs." | Michelle Roush, DVM

Answer: In endurance, beauty is as beauty does. Horse conformation traits rewarded in the show-hunter ring for their aesthetic value mean nothing in endurance if they don't help the horse get down the trail. Arabians and part-?Arabians dominate the sport?for a variety of reasons I'll explain later?but I've seen horses of all shapes and sizes succeed in the sport. Most of them prove the rule that "form is function": Structurally correct horses are more likely to stay sound over the many miles of repetitive motion and concussion that the sport entails. Here are the most important structural qualities to look for.

1. Balance. All of the horse's body parts should flow together. His weight should be evenly distributed from front to back and top to bottom. The hindquarters, for example, should not be disproportionately larger than the shoulders?or vice versa. Nor should the front end be higher or lower than the hind end. The bone thickness should be consistent throughout the horse, as well. A thick-bodied horse supported by toothpick legs is going to get in trouble...

Posted by Endurance.Net at 8:30 AM No comments:

Hoof abscesses can be painful for your mount and cost you time in the saddle. We asked Dr. Luke Fallon of Hagyard Equine Medical Institute for his best tips about dealing with hoof abscesses, including identifying, treating, and avoiding them. Read on to find out the signs that distinguish an abscess from another problem, what to put in your hoof-soaking solution, and what management techniques can help reduce your horse’s chance of getting a hoof abscess.

A hoof abscess can look terrifying to a horse owner, because it can cause severe lameness that appears to come on suddenly. To a worried owner who finds a horse or pony three-legged lame in his pasture, that can look like extremely serious.

“A horse with a foot abscess can look like he’s got a fractured leg,” said Fallon. “Sometimes, if it’s in a hind leg, it’s hard to determine whether it’s in the foot or up higher—in the stifle or hip region—because often they’ll show the same sort of lameness. In a front leg, a lot of times you can tell if it’s a hoof abscess by whether the horse is willing to flex or extend the fetlock joint, the carpus (knee) joint, and the elbow and shoulder. If they have any decreased range of motion or pain associated with manipulation of the upper joints, from the fetlock up through the shoulder, you may well have a lameness that is not caused by the foot.

“Abscesses are quite often associated with changes in the moisture content in the soil or environment,” Fallon added. “The white line along the solar surface of the hoof wall will open and close, and the quality of the periople—the waxy hoof coating that extends down from the coronet band and is similar to the cuticle on a human fingernail—can be compromised. That allows the hoof wall to crack and become shelly and split, which, in turn, can allow bacteria to track into the more sensitive regions of the hoof.”

If you suspect a hoof abscess, Fallon said, there are telltale signs to look for...

Posted by Endurance.Net at 8:32 AM No comments:

The Probiotic and Prebiotic Puzzle

**For a probiotics guide, see https://www.reviews.com/probiotic-supplement/ **

What we know and don't know about these digestive health products

If you’ve watched television or flipped through a lifestyle magazine lately, you’ve probably seen advertisements for health products, such as yogurt, that “contain live cultures,” touting their benefits to your digestive system. Perhaps you even use one of these probiotic supplements yourself or give one to your horse. There are so many different species of microorganisms in the horse’s gut, however, that it’s difficult to know if a probiotic supplement is the type needed to benefit his well-being.

What researchers do know is that the equine gut microbiome (microbe population) is important for overall health.

“We tend to forget that a significant percentage of the immune system is located in the gut, which is critical for regulating immune homeostasis (stability) and health,” says Amanda Adams, PhD, assistant professor at the University of Kentucky’s Gluck Equine Research Center, in Lexington...

Posted by Endurance.Net at 8:40 AM No comments:

Those dreaded crusty and itchy scabs are back. You know the ones. They cover the back of your horse’s pasterns, sometimes spreading to his fetlocks and further. And the worst part of this so-called equine pastern dermatitis (or EPD, often referred to as scratches) is that you know you have an uphill battle in front of you—successfully returning your horse’s affected skin to health is a notoriously difficult task.

So what’s new in diagnosing and treating EPD? Anthony Yu, DVM, MS, Dipl. ACVD, reviewed how to diagnose and treat this frustrating problem at the 2016 Western Veterinary Conference, held in March in Las Vegas. Yu is a board-certified veterinary allergist and dermatologist and owns Yu of Guelph Veterinary Dermatology, in Guelph, Ontario, Canada.

One key thing to remember about EPD, Yu said, is that it is not, in itself, a single disease. Rather, it’s a symptom of a variety of underlying conditions. As such, accurately diagnosing which condition your horse is afflicted with is essential to prescribing the proper treatment.

And, he added, “to achieve a positive therapeutic outcome, treating the predisposing and perpetuating factors is just as important as addressing the primary cause of EPD.” In short, it’s a complex process...

Posted by Endurance.Net at 8:05 AM No comments: 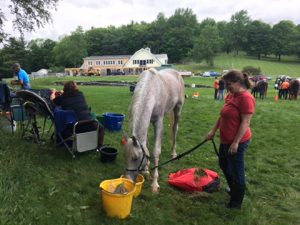 Iggy has been my test pony for all sorts of theories I’ve accumulated over the years we’ve competed and the horses we’ve brought along.

How it is easier to start a horse who is mature and has all of his connective tissues and bone fully ‘cooked.’ How it is not distance that ruins horses getting fit or competing; it is speed. How horses retain their fitness better than humans. How critical the brain is in an endurance prospect. How training is a more important focus than conditioning.

We’ve had Iggy since late March, and we’ve been making steady progress using all of the above philosophies.

Since he appeared pretty unfit when he came home with us, we just did baby rides around the trails here at home. Hills are always a part of our workout since we live at the top of a big one, but it was all about learning to use himself, getting persuaded that yes, he really did have to work for a living, and no, the dogs who accompanied us were not an excuse for hijinks. He got stronger, fitter, and honestly, all of that went seamlessly — no filled legs, no sore backs, no attitude issues (other than the dubious work ethic — which I empathized with — I’m not sure I’d want to start working after a three year vacation either), and a generally increasing capacity and enthusiasm for the work.

Iggy attended his first competition in Ontario, Canada, at Coates Creek, a 30 mile “set speed” ride, sort of OCTRA’s hybrid version of a LD ride crossed with a CTR. AERC vetting but an ‘optimum’ time window like CTR. I had little concern for the competition or rules; I wanted to see how Iggy would perform in a competitive setting — hauling, camping, vetting, starting, recovering.

My friend Rachel rode our guy Sarge purely as chaperone.

I repeated frequently and with glee, “this weekend is all about me, beyatch.” (I’d crewed for Rachel at Old Dominion 100, so I was hamming it up.)

This is probably as close as I’ll come to a diva, but Sarge was there to get us around. Rachel was there to do whatever was needed if things went pear-shaped. Luckily for us, it was all pretty uneventful in the most stellar way.

Iggy ate, drank, vetted, traveled along, passed, got passed, walked, trotted and cantered his way around the course.

Our biggest hiccup was related to motivation. On Loop 2, which to be fair to Iggy was his first real opportunity to be tacked up AGAIN and taken out after completing a first loop, he was unsure I’d packed enough quarters for the slot...

Posted by Endurance.Net at 8:29 AM No comments: