Never Get Lost on the Trail

Follow these simple steps to get back on track if you lose your bearings on a trail outing.

Some people are blessed with an innate directional sense; blindfold them and drop them off in the woods, and they'll find their way out in no time. Others become disoriented in shopping malls. If you fit into the latter category, you're not going to get into trouble on a single trail that loops back and delivers you to the starting point. Yet even seasoned trail users can get turned around on poorly marked tracks or become disoriented when forced off familiar ground by an unanticipated obstruction along the way. You have to have a rudimentary understanding of navigation and remain keenly observant of natural and/or man-made trail landmarks in order to keep your bearings.

"I find that people tend to get lost when they rely on someone else," says Montana wilderness rider Dan Aadland. "For example, you plan to head back separately after lunch, but you weren't paying attention because you were following someone else. Then it's easier to get lost..."

Posted by Endurance.Net at 1:39 PM No comments:

Supplements for Endurance Horse in Training?

Question
My 16-hand (163-cm) Anglo-Arabian is in good weight for his sport, just below optimal body condition. He’s in training year-round for competitive endurance riding, working towards 100-mile rides. He’s fed 2 lb (0.9 kg) of senior feed, 1 lb (0.45 kg) unmolassed beet pulp pellets, 0.5 lb (0.23 kg) whole flaxseed, 1 lb (0.45 kg) timothy pellets, one flake (3 lb, 1.4 kg) of quality hay, and free grazing. He was diagnosed with insulin resistance and hypothyroidism two years ago, but we manage that with diet control and exercise. Other than this, his health seems fine except for some hoof issues. He’s been a bit lackluster under saddle lately. I am worried about his electrolyte balance as we begin to step up the distance. I use a combination of electrolyte and homemade lipid-coated salt, but I would like to know more about calcium, magnesium, and selenium in relation to our region and supplementation.

Posted by Endurance.Net at 1:30 PM No comments:

Capturing horses with a drone 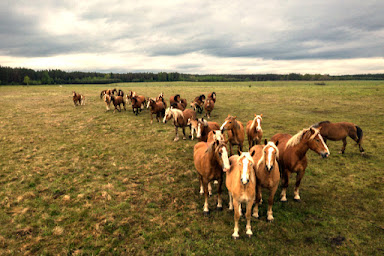 Current methods of trapping are based on chasing the animals into a corralled area – often using helicopters.

Is there another way? A less stressful, less expensive, and safer alternative? Sue McDonnell and Catherine Torcivia, of the University of Pennsylvania School of Veterinary Medicine New Bolton Center, believe that there is...

Posted by Endurance.Net at 8:22 AM No comments:

Two equine nutritionists shed light on the do’s and don’ts of feeding your horse for strong and healthy hooves. Read an excerpt of this article from the August 2020 issue of The Horse here.

How to feed your horse for strong and healthy hooves

Nutrition impacts everything from performance and temperament to growth and metabolic rate. Hoof quality is no exception. It can take up to a year for a full new hoof to grow, so what your horse eats today could impact his soundness much further down the road. In this article two equine nutritionists—Lynn Taylor, PhD, and Ashley Wagner, PhD—shed light on the do’s and don’ts of feeding for optimal hoof health.

The Recipe for Healthy Hooves

Your horse’s diet plays a crucial role in the quality and durability of the horn that makes up his hooves. Horses require certain nutrients in specific amounts and ratios to grow and maintain strong hooves. However, even the perfect diet is not enough by itself to grow good feet—­several other factors come into play...

Posted by Endurance.Net at 10:09 AM No comments:

Q. I live in an area plagued by wildfires. Thankfully, we haven’t been directly impacted, but we have experienced very low air quality. I always worry about my horses’ health, because they’re in stalls breathing unfiltered air. Is there anything nutritionally I can do that might help protect them?

A. Having lived in Northern California for many years during large wildfires, I understand your concerns firsthand. A horse’s respiratory system is the main limiter of performance.

While it’s possible to improve cardiac function and muscle mass, as well as the strength and skill to perform certain expectations, the respiratory system cannot be greatly improved through exercise. The ability to transfer oxygen across lung membranes into the bloodstream sets the upper limit on how much oxygen is available to reach muscle tissues. Muscles need oxygen to metabolize fuel stores of fats and carbohydrates using aerobic metabolism...

Posted by Endurance.Net at 9:31 AM No comments:

A different kind of endurance race 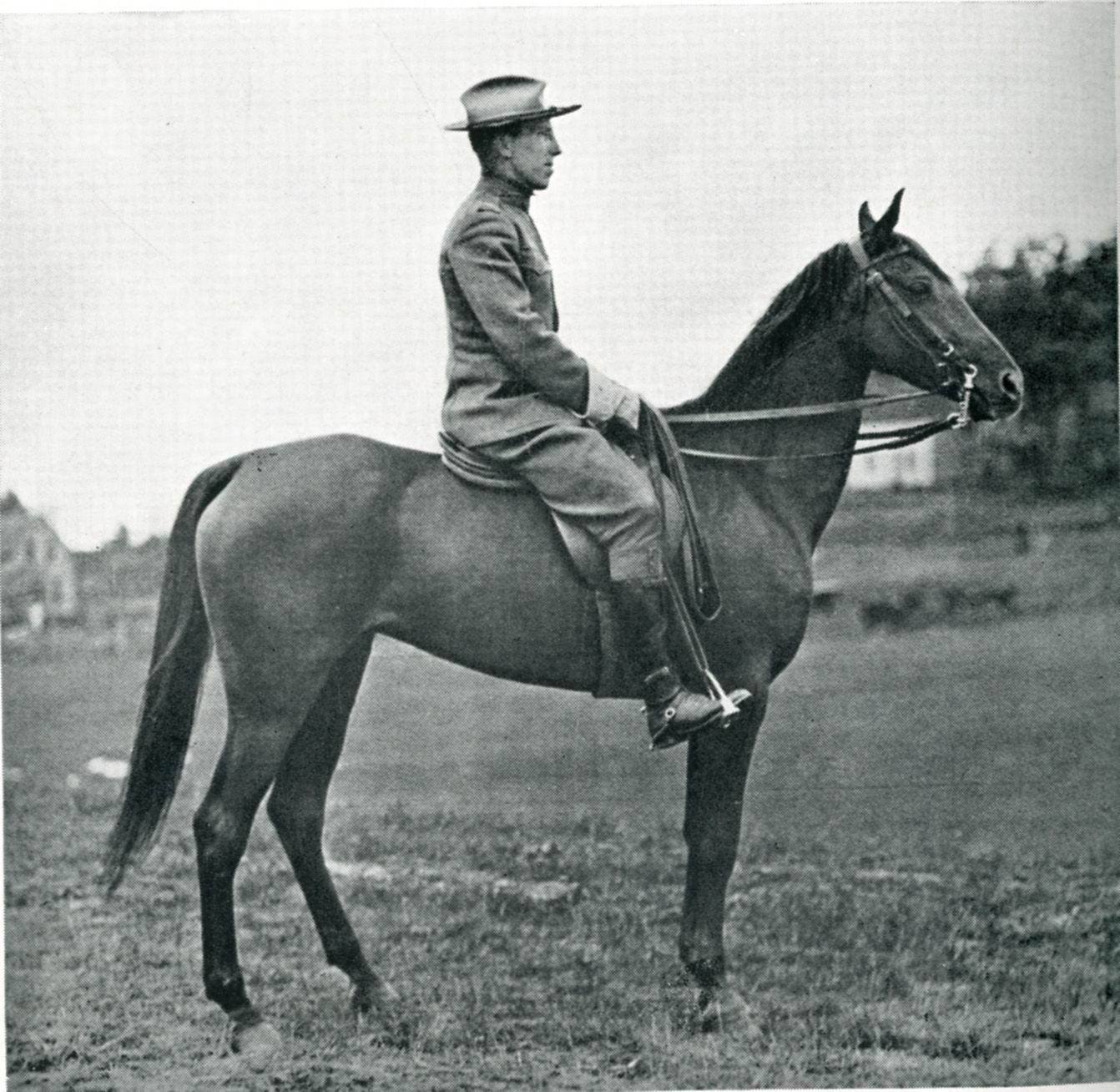 From the Boston Marathon to the Indianapolis 500, endurance and strength have always been celebrated. Even in the bygone age of horse power, a stress test to find the best horse and rider was first staged by the Morgan Horse Club of New England in a feat of stamina and survival for Vermont horsemen and their mounts.

The “Endurance Ride of 1913” followed a route that started in Northfield and made its way through Waterbury, Stowe, Hardwick, St. Johnsbury, Wells River and concluded in White River Junction – a distance of 154 miles. The route took two days – Sept. 16-17 – and was the focus of every equestrian in New England.

The Vermont Horse and Bridle Trail Bulletin called this event “the first test in America of weight carrying over long distances.” This occasion also marks the beginning of the endurance ride as a sport, and it was a Norwich University cadet from Barre who won this first-ever public competition.

Developed by the U.S. Cavalry as a way to grade military mounts, the “Endurance Ride” became a way for breeders to establish favorable bloodlines and for equestrians to establish bragging rights...

Posted by Endurance.Net at 1:28 PM No comments:

Reduced performance, including a shorter stride length, is likely a consequence of pain caused by equine gastric ulcers.

No matter the discipline in which you compete, your horse’s stride length is important. Longer strides can mean faster times, bigger jumps, and prettier movement. To get that edge, horse owners often focus on conditioning and joint health. Another key area to focus on is digestive health, specifically with regard to equine gastric ulcers.

The way performance horses are commonly fed, along with the stress of training, showing and traveling, causes acid levels to rise past the glandular portion of the horse’s stomach, leading to ulcers. That pain from sores on the stomach wall can cause your horse’s performance to suffer. Two out of three performance horses have stomach ulcers, and a study has shown that horses with ulcers have a shorter stride length than those without...

Posted by Endurance.Net at 9:01 AM No comments:

Italian and Australian researchers investigated the relationship between transportation, gastric pH, and gastric ulcers. The team was surprised by some of the results.

Veterinarians and scientists have long suspected a relationship between transport and gastric ulceration in horses, but until recently little data existed to support this association. However, a team of Italian and Australian researchers, has now found some definitive answers.

“We carried out a survey entitled ‘Horse Transport Issues and Management,’ and we found an association between transportation and stomach ulcers,” said Barbara Padalino, DVM, PhD, associate professor of animal science in the Department of Agricultural and Food Sciences at University of Bologna...

Posted by Endurance.Net at 9:32 AM No comments:

7 Rules for Buying a Horse

I have had the opportunity to conduct a lot of presale/prepurchase exams. You know, the exam that you’re almost obliged to schedule prior to making one of the most important purchases (in terms of time and money commitment) in your life. And, honestly, I’m absolutely flabbergasted at what goes on in the sales process.

I mean, I do think that having some sort of an examination done on the horse that you’re intending to buy is fairly important (an examination on the horse: your significant other might think that you need to get your head examined), and especially for someone who is relatively inexperienced in the process. However, there’s quite a bit of nonsense that can go on during the process of buying a horse.

This is not a “how to” when it comes to prepurchase exams—there are probably as many ways to do these exams as there are people to do them. Instead, let’s see what we can do to help put you—and keep you—in charge of the process.

Here are seven rules to live by, when it comes to buying a horse...

Posted by Endurance.Net at 1:04 PM No comments:

A lot of people use the words laminitis and founder interchangeably. Are these two conditions the same thing?

Q:I hear a lot of people use the words laminitis and founder interchangeably. Are these two conditions the same thing?–Alyson, via email

A:That’s a more difficult question to answer than you might expect...

Posted by Endurance.Net at 9:35 AM No comments:

Learn how to craft a diet for the horse with painful lesions in his stomach.

How to craft a diet for the horse with painful lesions in his stomach Which horses would you traditionally consider “ulcer-prone”? Racehorses in training? Western pleasure horses showing competitively on the American Quarter Horse Association circuit? Pony Clubbers’ games ponies? Injured horses on stall rest? Truth is, you could be right with any one of these.

Equine gastric ulcer syndrome (EGUS) can plague any age, breed, or sex, and the risk factors are many—certain types of training and exercise, nutrition, feeding practices, and stabling, to name a few. Let’s take a look at one very important aspect of preventing and managing ulcers: diet...

Posted by Endurance.Net at 12:52 PM No comments: Ghost the mustang joins four Quarter Horses at the Vandenberg Airforce Base as part of the Military Working Horse law enforcement unit.

When the United States Space Force was launched in February 2019, it created a new division of the military to go along with the Army, Navy, Air Force, Marines and Coast Guard. With such a futuristic name, and a mission that’s out of this world, you might be surprised to learn that the branch’s latest recruit isn’t a computer genius or military mind at all; instead, the latest addition to the Space Force is a horse, of course.

His name is Ghost, a mustang. Ghost joins four Quarter Horses at the Vandenberg Airforce Base in California as part of the Military Working Horse law enforcement unit. The base is home to the 30th Space Wing and supports West Coast launch activities for the Air Force, Department of Defense, National Aeronautics and Space Administration. The “Wing” also is the site of launches for disposable space vehicles like the Atlas V, Taurus and the aptly named Pegasus, among others...

Posted by Endurance.Net at 12:50 PM No comments: