Vetting the Tevis - by Karen Phillips 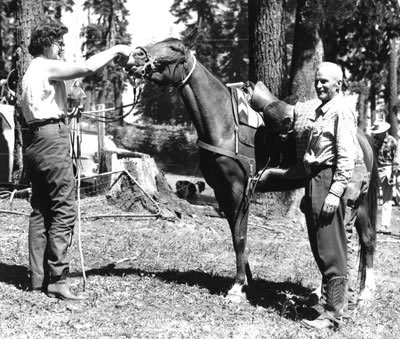 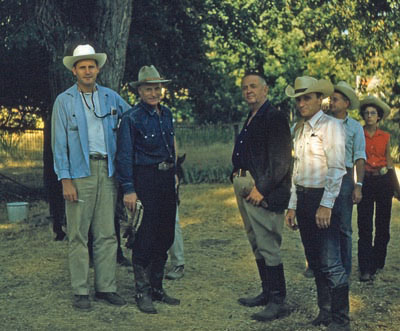 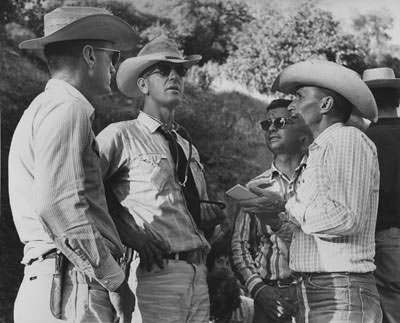 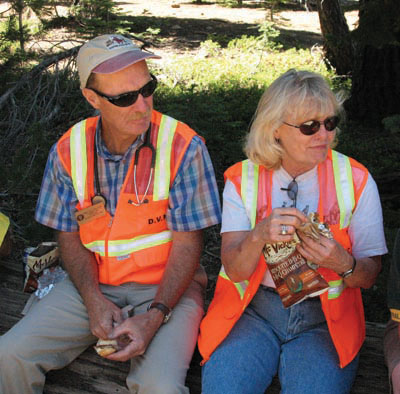 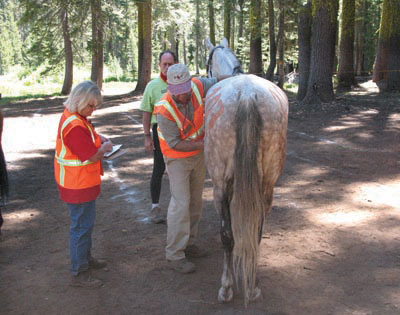 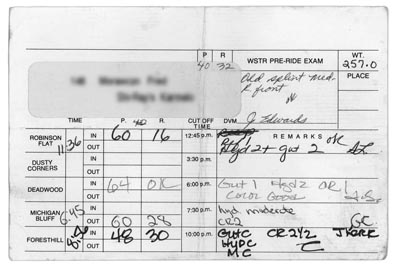 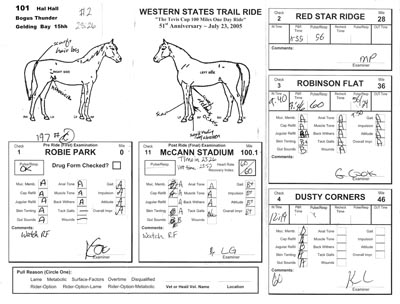 A brief history of the use of veterinarians for the
Western States Trail Ride, 100 Miles 1 Day

The Western States Trail Ride, 100 Miles One Day, begins just south of Truckee and continues to the fairgrounds in Auburn. Today the ride is more commonly known as "The Tevis," after the Tevis Cup, which is awarded to the first horse and rider to finish. This annual, international, event was founded in 1955 by Wendell Robie, local businessman, avid horseman, and innovator. At that time the ride was an unknown quantity. "When we started there were no rules or criteria to go by," Wendell remembers. "They were developed as we went along."*1 From the beginning he insisted on using veterinarians. In 1956 three vets were used (compared to 17 staffed in 2007); Dr. Wheat and Dr. Kitchen of UC Davis, and Dr. Bullock of Auburn. The rules section of the 1957 welcome letter to ride starters, regarding vet exams, states "there is no chance of cruelty to tired horses with their inspection."

Dr. Robert Bushnell, a nephew of Robie, remembers the first year he vetted the Tevis in 1958 with 35 riders (compared to over 200 currently). "I remember it was just the two of us, me and Dr. Bill Lewis of Auburn," he says. "Lewis was a laid back kind of guy. We traveled to each checkpoint in an old jeep with a fishing pole sticking out the back. Lewis wanted to stop at every fishing hole. We really had to hustle."

In 1959 Dr. Murray Fowler became the chief veterinarian. He served as chairman of the veterinary examining committee for 15 years.*2 One year during Fowler's tenure, Drucilla Barner, Robie's secretary and the first woman to win the Tevis Cup, was diagnosed with terminal cancer. It was her last ride and her horse came up lame. Robie begged Fowler to let her finish. Robie told him, "I'll carry the horse if I have to." But Fowler couldn't do it. After all, he had helped develop the stringent vetting standards that Robie himself approved.

In 1961 Dr. Richard Barsaleau started vetting the ride and remembers a pivotal moment when he pulled Robie's horse for lameness. Robie was not pleased, but later walked up to Barsaleau, punched him in the arm, and said, "You were right." At the request of Mr. Robie, Dr. Barsaleau became chairman of the judging committee the next year and alternated in this head veterinarian’s role with Dr. Fowler for the next several years.*3

With experience, vets learned to be more objective in their analysis during post-ride examination. The awareness of the signs of an impending crisis improved due to the sheer number of horses examined on the ride. "We saw all gradations of fitness," the now 82-year-old Barsaleau says. The Haggin Cup Award was established for the best-conditioned horse of the first 10 finishing horses. Barsaleau was instrumental in making changes to the parameters of the award based on his philosophy that "the horse should be used, but not used up."

Dr. Todd Nelson, head vet in the 80's and early 90's, instituted changes to the number of one-hour-hold checkpoints (originally three and now two), the location of some checkpoints, and how horses are timed in. Moving the Devils Thumb checkpoint to Deadwood allows horses a mile to recover from the grueling series of switchbacks in the canyon they just climbed out of. A "gate-to-hold" was instituted where horses rest for one hour after their pulse has dropped to near normal. In earlier years riders could gallop their horses into a vet hold knowing they could use the horse's rest time to meet the pulse criteria, or "gate." These changes benefit the horse and encourage more responsible riding.

A shift in perspective occurred when vets judging the ride actually rode the Tevis. That experience became a valuable insight into the future of the event and the safety of both horse and human. Fowler was the first vet working the Tevis who entered the ride. Soon after, Barsaleau participated, completing 14 out of 16 starts. However, not all vets were eager to enter the ride. Dr. Jim Edwards, the longest acting vet on the vet committee, says that he and Nelson "were going to get a couple mules and ride it, but we made a pact that we’d call each other and talk until the feeling passed." According to Dr. Greg Fellers, head vet since 2005, "Sitting in the saddle for 24 hours is not my idea of a good time." Dr. Jamie Kerr, head vet from the late 90's until 2005, asked Fellers to take over as head vet, temporarily, so he could ride the Tevis. Kerr graciously bequeathed his title to Fellers as he continues to alternate between riding and vetting the Tevis each year.

Over the years the relationship between vet and rider changed, according to Penny Scribner, six-time Tevis finisher. "The first time I rode, vets strictly enforced rigid rules with little discussion with the rider or even with another vet," Scribner tells me. She attributes part of the change to Fellers. "The vets work with management and riders much more now instead of just showing up and acting as policemen," says Fellers. "There can be an adversarial relationship between vets and riders if you allow it, but it can be a win-win situation."

Fellers has seen riders often unwilling to see lameness in their horses even when it is obvious. The decision to pull a horse is a serious one and the rule has always been that a minimum of two vets consult on the matter. The main mode of communication between the vets is the rider's card. "As you can imagine on a 100 mile course," Fellers says, "we get strung along from hell and back." The cards pass along little "alerts." The rider's card has been reformatted for easier recording and communication.

One of the biggest changes, made recently, was to put in place exit exams at the two existing one-hour-hold checkpoints located at Robinson Flat and Foresthill. "We were letting horses back on the trail that might have needed another look," says Fellers.

Fellers has seen a "paradigm shift" while vetting the Tevis. "The level of care we can provide now is far better than, say, 10 years ago. I would dare to say that the Tevis is at the very forefront - in the field - in the level of care of horses that need treatment."

One of the main reasons for treating a horse is dehydration. "Some horses arrive ... dehydrated," Edwards points out. "They're already behind the eight-ball. They really need a day to get over the trailer ride." The challenge and working with his colleagues keeps Edwards coming back to the Tevis. "This is what it's all about. Looking at a fit horse ... and spotting something before a rider can even feel it," he says. "The Tevis is the ultimate. It's the oldest race and the toughest. It gets in your blood."


Footnotes:
1. The Tevis Cup by Verne R. Albright
2. Murray, Hummingbirds to Elephants and Other Tales, Autobiography of Murray E. Fowler, DVM
3. Endurance Ride Judging - How It All Began by Dr. Barsaleau, 2004 Tevis Forum

Author’s note: The history of vetting the Tevis has played a key role in the study of the horse under stress. The veterinarians mentioned here are only a small fraction of the many notable doctors who have included vetting the Tevis as part of their legacy in veterinary sciences. Much has changed since the Tevis started in 1955, but one thing has remained the same—the commitment of vets to keeping the horse healthy and safe.

For more information on the Tevis, visit www.foothill.net/tevis
Posted by The Equestrian Vagabond at 10:43 AM