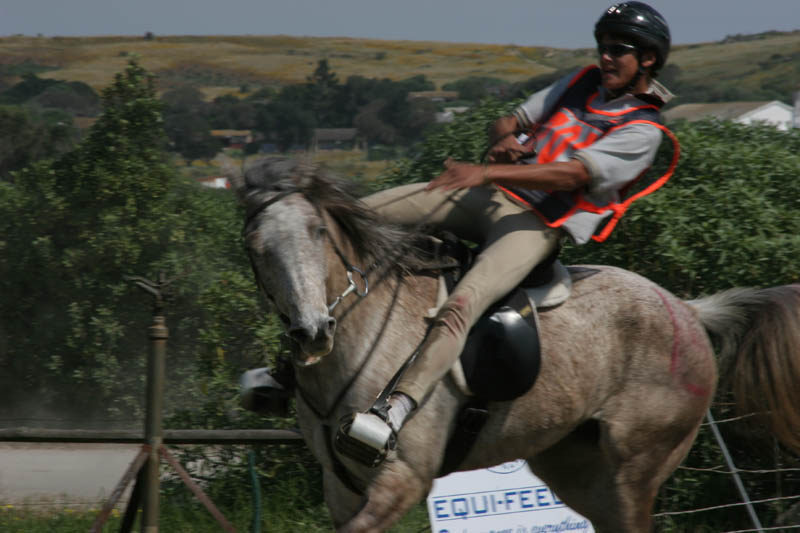 There are some interesting differences (as well as similarities)between endurance in South Africa and the USA (and other parts of the world). They've been doing some form of Endurance since 1965. The father of Maurius de Swardt (the folks who gave me a horse to ride) actually organized the first 'marathon' for horses 31 years ago. Maurius was just a boy, but remembered it well. The rules have certainly evolved since then, but the riders and horses and spirit have been alive and well in SA for quite some time. Namibia and Botswana are also doing Endurance - both National (club - e.g. AERC) and FEI. These three countries are the only countries currently competing in the southern part of Africa... though Rojan said that Maritius (on the east coast - a major quarantine and export country for horses in Africa) is also thinking of doing a ride. I told him to give them my name :)

There are several siginificant differences.

One - both Namibia and South Africa have a qualification system in place. I think Namibia has stricter qualifications than SA, but basically the horses have to do x number of 60km rides (in Namibia it's 3) and then x number of 80km rides before they can move up to either 120km or 160km rides. Since there aren't that many rides in southern Africa, and folks have to travel fair distances to attend rides, this typically takes 2 seasons. So horses that are entered in 120km or 160km rides usually have a base of 2 years on them.

Two - the rides often have a cut off time. For the 160km, the cutoff was 14 hours ride time. The 80km also had a cutoff - maximum ride time was 8 hours. (Trilby would have to hurry a little over here). They do not polk along like we often do in the USA. Rojan and I rode the 80km ride, this was his horse's first 80km ride and he was 'taking it easy'. Our ride time was 6:45 - maximum would have been 8:00. Still a pretty good clip. I think the winning time was around 4:30 on a fairly flat and easy course.

Three - the National club keeps log books for every horse (at least this was the case in SA - I think it's the same in Namibia). Every ride is recorded, including eliminations for lameness or metabolics. The books also contain vaccination records similar to FEI passports, and horses must be keep current on their vaccinations, just like FEI. (the rider is issued a 'warning' if the vaccinations are out of date, or ID diagram incorrect).

Four - they still run some National rides with an Open Gate system. (though Namibia has almost gone entirely to FEI rules - same as AERC basically). This is more common in South Africa, but some think this will eventually change too. They come into the vetgate - and after they cross the line the horses have 25 minutes to recover. They don't even present to the vet until 25 minutes after they come in. At 25 minutes, they present, (if not recovered they are eliminated) - and then they have another 25 minutes of hold before leaving.

One - like the USA - they have weight division categories in addition to overall placement - light, standard, heavy. Plus Junior/Senior category. They are also very big on Team competitions - typically the clubs from the different regions field a team.

Two - except for the remnants of the Open Gate system in SA, they run the same rules, basically the same as FEI. They also do drug testing. They also have year end awards - sometimes based upon points and rides ridden, as well as judged awards 'most improved', etc.

And finally - they are friendly and supportive and will do anything to help each other out. This is the same the world over I think. It is very much a family sport here, plus a smattering of hired men doing the actual competing (e.g. Franz at Walvis Bay, and Willa at Saldanha). Men or boys who ride for the owners, for the farmers.

It's the same sport - but the most notable difference that I've observered is not beween SA/Namibia/Botswana and the rest of the world, but between the USA and the rest of the world. Certainly we have some very competitive rides - and probably more competitive on the East coast than the West. But we also have a very strong 'recreational' sport in the USA - miles and completions and riding simply for the scenery. This is something that I haven't seen elsewhere, at least not to this degree. (but I think it's a good thing to have this range - this depth - in the sport)