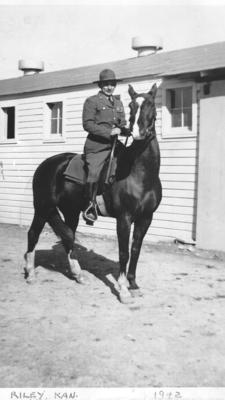 Seymour Weiner, 96, author of "Nature's Graffiti," a book of photography of the boardwalk at Green Cay Nature Center, grew up in Brooklyn. He never saw a horse except for those used by peddlers in his neighborhood, and the time when he was 6 and a man with a camera and pony took his picture.

In 1942, when he was 23, Weiner was called to the Brooklyn armory where he was inducted and sworn into the U.S. Army.

As a new recruit, Weiner was questioned if he had ever ridden a horse before. When he replied in the negative, he was chosen for the horse brigade, because they wanted to train recruits with no prior experience.

"It's about dogged determination and the will to succeed," Weiner said in his written memoir of these days.

He was sent to Fort Dix for additional processing and slept in a six-man tent with other new recruits. He remembers that the day of a family visit, his tent caught fire after a chimney pipe was knocked.

After that, he was sent to the hub of the U.S. Horse Cavalry, Fort Riley, Kansas.

Reluctant to go, the experience has stayed with Weiner for three-quarters of a century.

There, he was introduced to his horse, Big Black, who he described as "a big, black, red-eyed monster."

"He was very big and not pleasant," Weiner said. "When he looked at me with those eyes, I knew I was in trouble."

His commanding officer threatened him with kitchen patrol duty if he didn't get back on the horse.

He recounts another story from his training days, which he calls, "the day it rained horse manure."

Another time while grooming Big Black, the horse turned in his narrow stall, banging from side to side, with Weiner holding on to the animal's neck for dear life.

"That mean horse was trying to get me to his backside, so he could kick the hell out of me," he said.

Weiner escaped by climbing to the top of the stalls.

"I'll never forget it as long as I live," he said. "It was really frightening."

After surviving his escapades with Big Black, Weiner excelled in rifle training, especially in a rapid fire prone position, on his stomach, and became an expert rifleman where he learned to shoot a pistol from a galloping horse.

For this he earned a silver medal in the shape of a wreath, and later, a sharpshooter's medal for pistol, mounted.

"The Army made a man out of me," said Weiner, who eventually went to communications school in the Army and learned Morse Code and radio operations for armored vehicles.

Before leaving for Europe, Weiner came down with walking pneumonia and spent six weeks in the hospital in Fort Hamilton, Brooklyn.

After another six weeks in rehab, Weiner was deployed to Europe and the Battle of the Bulge, crossing the Rhine River into Northern Germany with the 9th Armored Division as a radio operator in an armored vehicle.

He survived three battle campaigns and was part of the first American troops to reach the Elbe River and meet the Russians.

"I was lucky to come home alive," Weiner said.

When he returned to the States, Weiner worked in New York City's garment center and in the food service business.

He married Sylvia, a girl from the old neighborhood, and the couple had two sons. They were married 59 years, before Sylvia died in 2003.

"She was pretty and smart as a whip," said Weiner, who fell in love with her at first sight.

"Mr. Weiner's contributions to our war effort cannot be understated," said fellow veteran Tom Kaiser, who would like to sign up Weiner to receive the French Legion of Honor medal for his service in Europe.

These days, rather than riding a horse, Weiner spends his days walking the nature trails at Green Cay, where he captures photos of the boardwalk and the surrounding birds.

"Seymour is an incredibly interesting man that I learn something new about every time I speak with him," Green Cay Nature Center manager Rebecca Weeks. "He is very passionate about his projects that have been shaped by his varied and interesting past."

Posted by Endurance.Net at 8:48 AM