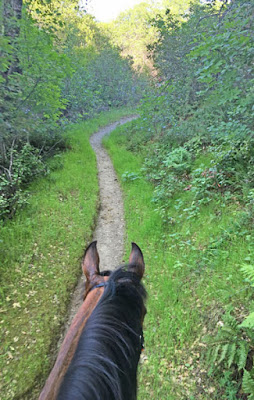 A very sad event happened on a local trail: a horse tried to turn on a very narrow trail, lost it's footing, and slid down the side, where it broke it's leg. It had to be euthanized. This is a tragedy for horse and rider, and I have nothing but sympathy for them. There were posts wondering what trail it was, and I realized this is a trail I ride weekly. I never thought this section was particularly dangerous, but it sadly was for that horse.

Some folks called for the trail to be closed, some for it to be inspected, (which was done, and it was determined it wasn't any worse than other parts of the trail), and some remarked that horses and riding are inherently risky activities. There was a comment that all of our trails should be brought up to a higher safety standard. While great in theory, that would literally mean about 95% of the trail in question (Pioneer Express) and probably 85% of the Tevis trail (just to name a few!) would be deemed unsafe.

This brought up many different, and sometimes conflicting, ideas in my head. I DID almost slide down a (even steeper) cliff alongside the trail myself earlier this year. Luckily my athletic horse saved us. It could have gone very wrong. Maybe I should have been paying more attention to exactly where he places his feet, and riding more aggressively, but I do let Major pick the trail most of the time. Will I be more attentive in those steep sections after that? Most certainly!...

Posted by Endurance.Net at 9:33 AM