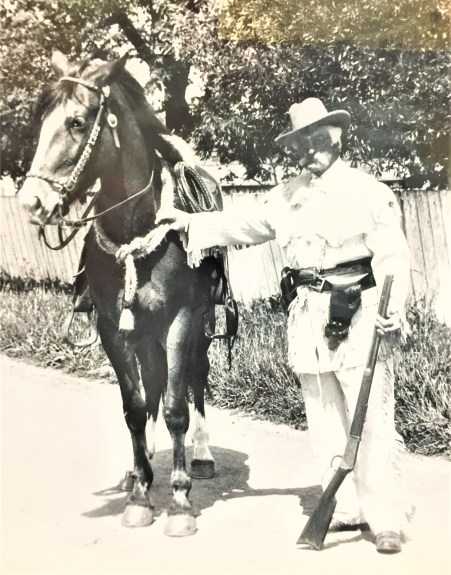 Frank “Deafy” Derrick, one of Vallejo’s most colorful characters a century ago, claimed to have ridden with Kit Carson to Montana, where he met William “Buffalo Bill” Cody and they both became Pony Express riders and Indian fighters. It turns out Derrick made up many of his stories — but he still had plenty of true horseback adventures.

When Derrick died in 1938, the San Francisco native was eulogized as “one of the last links” to the Wild West. Newspapers recounted his story of running away at age 10 and winding up in Virginia City, Nev. He said he then rode with Carson from Nevada to Montana, meeting Cody there in 1862. “Deafy,” who got his nickname (pronounced deefy) because he was deaf, also told of fighting Indians on his 75-mile-long Pony Express route. He said he was wounded 10 times by bullets and arrows.

There are many holes in those stories. For starters, in 1862 “Buffalo Bill” was a teenager in Kansas, and his own claim of riding for the Pony Express has been challenged. The Pony Express started in 1860, lasted only 18 months and was gone before the end of 1861 — and its route never ran through Montana. Then there’s Derrick’s claim in his later years to be nine or 10 years older than he really was — possibly to put him closer in age to “Buffalo Bill” and make his stories more believable. But numerous records show he was born in 1856. Skinny boys in their teens were favored as Pony Express riders, but not 6-year-old children — Derrick’s age in 1862. As for riding with Kit Carson, Carson’s last stop in Nevada was in 1853 — three years before Derrick was born — and he was mainly in New Mexico throughout the 1860s...

Posted by Endurance.Net at 8:14 AM