In which we meet another Endurance Standardbred: welcome, Eli! 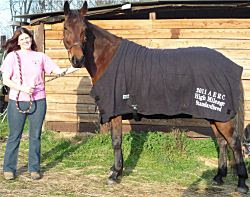 In my not-even-vaguely subtle attempt to promote Standardbreds in endurance,
I'm writing a series of posts spotlighting some of the fabulous competitors.
This is Part 2 of the series.

He is registered with the United States Trotting Association, a son of Western Paradise out of MD Has for those who pay attention to pedigrees.

Here's what Patricia has to say about Eli:

In 2009, I applied to be an adopter for New Vocations Racehorse Adoption Program. After seeing this video clip I adopted him in less than two hours and had him shipped home to me in NC:

We hit it off immediately. He is honest and works so very hard. He picked up trail riding quickly. He has legs of iron from years of jogging on the racetrack. He can trot for hours at 10-13mph and his bursts of speed dazzle the imagination. His arsenal of gaits include a 5mph walk, the trot, the pace, the stepping pace and a slow rack...

Posted by Endurance.Net at 8:58 AM